I had the pleasure of meeting artist Steven Gilberts and his wife Becky a few years ago at GenCon. I noticed Steven’s artwork through the throng of people, and it drew me to their booth with its surreal creepiness. I ended up buying a print titled ‘Vacation Destination’, that hangs in my office, glowering down at me while I write, providing great inspiration. Steven was kind enough to grant me an accepted interview. 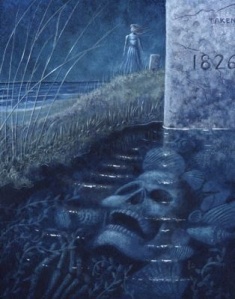 Q1: What was it that first sparked your interest in horror at an early age?

S.G.: “It probably would be Lovecraft. When I was in high school, I would read a lot of Sci-Fi and stuff like that. I didn’t read a whole lot of horror, but I always liked short stories. I’d go hide in the library when I was supposed to be doing homework, and I’d pull out an anthology of ghost stories or something like that and read them. It was later on when I started reading Ramsey Campbell that it took me back to H.P. Lovecraft. Once I got into the Cthulhu Mythos I couldn’t get enough of it.”

Q2: Who were some of your early artistic influences?

S.G.: “During high school I was interested in the art of Frank Frazetta. Then Boris Vallejo, I had seen his work all over the place, then The Brothers Hildebrandt. When I saw their work… that really impressed me, because it was different. They had fantasy stuff that wasn’t barbarians or sword and sorcery. The Brothers Hildebrandt were probably kind of a transitional art from sci-fi/ fantasy to horror for me. The way they rendered their images, their compositions were so different from the typical barbarians and dragons and all of that. In high school one of the teachers brought in his copy of H.R. Giger’s Necronomicon. Every time we’d come into class, me and some friends would look through that book and just be amazed. For years after, that was pretty much the one stand out of horror art for me.” 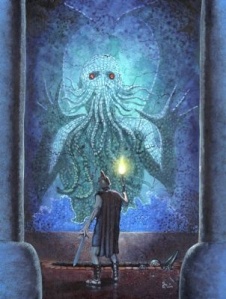 Q3: When given an assignment to do work for a story, do they ask for a specific scene, or do you have the freedom to create an image you think would best portray it?

S.G.: “It tends to go either way. Every once in a while I’ll get very specific assignments when they’ll say this is what we want to see, but more often than not I’ve been given a lot of leeway. A lot of the time, if it’s okay with the publisher, I’ll contact the author to see if they have any ideas. I want the author to like the finished work also.” 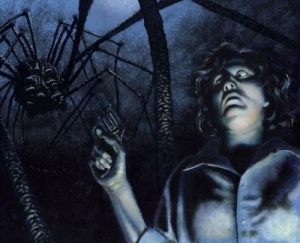 Q4: Do you like to listen to music when you are working on a piece?

S.G.: “Generally I’ll listen to music. It depends on the piece and how well it’s going. If things are going smoothly, I love to listen to classical music like Sazons, actually it would be the spookier classical music. I love movie soundtracks… the Jerry Goldsmith soundtrack to Legend. It’s perfect music to listen to if you’re doing weird stuff. I love Peter Gabriel. I’ve done many a painting to his music, and Genesis, Emerson, Lake and Palmer… Porcupine Tree. I just got into them a few years ago.”

Q5: Do you have a personal favorite of your own work?

S.G.: “My piece, ‘There has been a Mistake!’, the one with the jack-o lantern on the porch with the grape fruit spoons. I had fun doing that one, and I love the way that one turned out. After I finish a painting, I always see my mistakes. But with that one, there isn’t anything I would have done differently.” 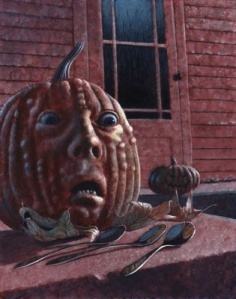 Q6: Do you ever start reading a work of horror and think about images you would create if you had it as an assignment?

S.G.: “Anymore, since I’ve got into the publishing business, I can’t read something without thinking ‘how would I do that one?’ It’s almost like I’m always on the job. Anything I read now I’ll notice where there is a particular scene that would be really good to illustrate. Even in stories that are not graphic intensive in description or imagery, it becomes like a problem solving thing.”

Q7: What are some of your favorite horror writers?

S.G.: “There are a bunch of older writers that I’ve read their stories years ago, but I hadn’t paid attention to who the author was. When I was in high school, one of the anthologies I read had a story in it about a man who lived in an old mill, and he heard this grinding rumbling noise beneath the mill and finally it ends up being this gigantic worm that has burrowed through the bedrock. Centuries before, when the mill was running, it sent out these vibrations that attracted its attention. Great story, but I don’t know who wrote it. Older authors that I paid attention to were Lovecraft, Robert Bloch… Algernon Blackwood. I remember years back reading ‘The Wendigo’ and I love that story because it’s so atmospheric. H.G. Wells, I liked a lot of his stuff.”

“Of the newer authors, of course there’s Ramsey Campbell. He’s the one who pretty much brought me into the horror genre to begin with. Neil Gaiman, I love his work. It tends to run the gambit between horror and fantasy, but even his fantasy stuff tends to be on the darker side. Stephen King’s ‘The Mist’, it isn’t often that a story will make me nervous, but that one was written so well. Peter Straub is another one. I love Clive Barker’s work, too, with his descriptions and dark portents of doom.” 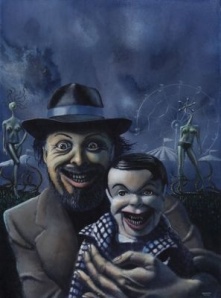 Q8: You’ve done some work for the RPG industry, such as with Chaosium’s supplement Secrets of New York. How different is that from working for book and magazine publishers?

S.G.: “With those it was really specific with what was needed. There wasn’t a lot of leeway with doing anything that was surreal. I was given very specific scenes. I did have fun doing it. I also did three cards for Fantasy Flight one time, and that also was very specific. The cover for Secrets of New York, if I remember correctly, I think I did come up with that on my own. William kind of gave me some things he’d like to see in it, and then it was basically up to me to come up with the composition. That was fun. Other than Chaosium, I don’t do a lot of gaming work. One of the reasons is that with Chaosium I don’t have to give up the rights to my work. Whereas the Fantasy Flight ones, they own those. I can make some prints of the artwork and sell those, but I can’t submit them anywhere else to be published.”

Q9: Do you have a dream project in the back of your mind that you would like to tackle one day?

S.G.: “There’s a personal project going back to ‘At The Mountains Of Madness’, where I’d like to do illustrations of The Elder Ones, where they are looking at all the reliefs of their history and of the dead cities. I always thought it would be neat to do some illustrations of the crinoid aliens with dinosaurs. Another one is, I’d love to do an assignment that would involve Neil Gaiman’s work, just because I’ve enjoyed reading his stuff. Or with Ramsey Campbell, that’s another dream job.” 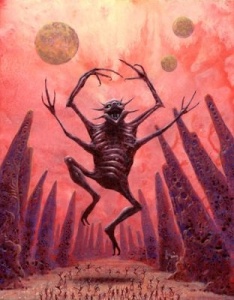 S.G.: “I’m currently working on a large multi-image project and also an illustration assignment for an upcoming Cemetery Dance project. Both are on the hush-hush right now, but they should be announced later this year. In addition to the publishing gigs, I’m doing a series of personal works for The Tim Faulkner Gallery in Louisville, Ky. ”

Q11: Is there anything you would like to add?

S.G.: “If it wasn’t for my wife Becky, I couldn’t be doing what I’m doing. So I’ll dedicate my interview to Becky.”

You can check out Steven’s awesome work at his website at http://stevengilberts.com/ 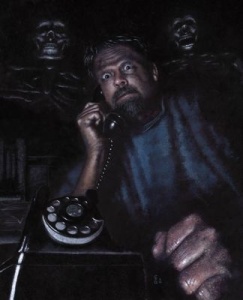