William Hope Hodgson was born in Blackmore End, Essex in 1877. He ran away from boarding school at the age of thirteen to work at sea, eventually becoming a lieutenant in the merchant marine. Being a short man, Hodgson began a rigorous workout regiment in order to protect himself from bullying by other sailors. He left the sea trade after becoming unhappy with the lifestyle but used his experiences in a number of his short stories and novels, his best selling novel, THE BOATS OF THE GLEN CARRIG (1907) in particular. His expertise in bodybuilding lead him to open his own exercise school, W.H. Hodgson’s School of Physical Culture in 1901. He even used his knowledge of how muscles work to handcuff famous escape artist Harry Houdini on stage in 1902. It took Houdini over two hours to escape the restraints, after which he accused Hodgson of intentionally hurting him and jamming the locks of the cuffs. When the gym failed to earn him enough for a living, he turned to writing.

His great imagination is evidenced in his classic novels and short stories. Along with THE BOATS OF THE GLEN CARRIG, he also wrote the popular novels, THE HOUSE ON THE BORDERLAND (1908), THE GHOST PIRATES (1909) and THE NIGHT LAND (1912). I covered Hodgson’s brilliant Carnacki ‘The Ghost Finder’ stories in an earlier article ( http://mattcowanhorror.com/2014/03/08/the-adventures-of-carnacki-the-ghost-finder/) Hodgson died during WWI after being struck by an artillery shell in Ypres in April of 1918. He had been previously sent home from an injury but insisted on re-enlisting once he recovered.

1. The Valley Of Lost Children (1906) – This one isn’t scary, and I found it a difficult read due to the dialog being written to mimic the accents of the characters. It’s about people whose child has died, catching a glimpse of the afterlife valley where they play. This one lacks the punch and originality of the other stories listed here.

2. “The Mystery of the Derelict” (1907) – A merchant ship in the area referred to as The Sargasso Sea spies an ancient derelict hulk (ship) adrift in a large mass of weeds atop the water. They cautiously watch from a distance and see a smaller ship approach it. Soon afterward, gun fire is heard before falling silent. When there’s no response from a flare sent up the next day they send a row boat of ten men to investigate. The smaller boat is found deserted but has rammed into the derelict hulk creating a hole above the sea line. They decide to try and uncover what’s happened to the crew and encounter something deadly living aboard the weed-covered derelict.

4. Out of the Storm (1909) – This short tale is from a sailor whose ship is hopelessly caught in a horrendous storm. The captain is relating the events to his friend on another boat via telegraph. It’s so well written that it really seems the ship is inside Hell itself. He describes the sea as laughing as it pummels the ship and tells of the evils the people aboard engage in as they fight for their lives to keep from being swept away.

5. The Derelict (1912)– This suspenseful story tells of a sailing vessel that notices another ship in the distance as they emerge from a storm. The ship is obviously old and after repairs are made to their own ship, the captain, the doctor and a few others take a rowboat to investigate it. The ship they find is covered in a thick, white mold with a strange animalistic smell to it. The story unfolds in such dramatic fashion the reader’s attention is solidly engaged. This is another story that shows Hodgson’s incredible imagination.

6. “The Thing in the Weeds” (1913) – a ship is attacked by a vast and stealth predator of the sea when they pass through an ill-smelling patch of weeds.

7. “Demons of the Sea” (1923) – A ships crew observes strange bubbling coming up from the sea. The water temperature rises into the nineties and a thick fog covers everything. It’s said there has been an underwater earthquake that’s the cause. Soon a large ship appears out of the fog near them, piloted by hideous beasts.

1. Six of his Carnacki stories are collected in an anthology titled, Carnacki ‘The Ghost Finder’. Some turn out to be human culprits instead of the supernatural. There’s also a free RPG available online for the Carnacki setting for Forgotten Futures IV.

2. Season 4 of the excellent TV show LOST has a character whose name matches one of Hodgson’s creations. The captain of the freighter near the LOST Island is named Captain Gault. LOST likes to use literary references so the possibility exists that they could be referring to Hodgson’s character (there is a similarly named character in an Ann Rand book, but it’s spelled differently).

3. An anthology edited by Sam Moskowitz entitled HORRORS UNSEEN, was published in 1974 dedicated to Hodgson. It included THE GHOST PIRATES with its previously unpublished original ending, which was found after his death. The book also contained a number of short stories that either influenced Hodgson or seemed to have been influenced by him. 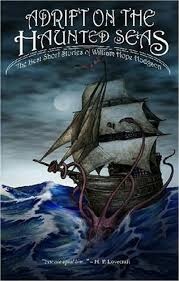