“TEN STRANGE JOURNEYS INTO THE UNKNOWN

Great tales of suspense and terror written by masters of the macabre…
Heart-trembling reports from the uncanny world of witches, warlocks, and demons…
Ten stories of unexplained events and unholy beings, calculated to give you the SHUDDERS.”

This is how TEN TALES CALCULATED TO GIVE YOU SHUDDERS, an anthology edited by Ross R. Olney, published by GOLDEN PRESS in 1972 and 1979 begins. Although, it has sat on my shelf for many years, I can’t remember from where I got it. It’s a nice collection of tales featuring several greats, such as Robert Bloch, A.M. Burrage, H.G. Wells, H.R. Wakefield, and William Hope Hodgson. It also includes a story by a writer I’ve been unable to find anything about, Robert G. Anderson.

Here’s a look at the stories included:

1. “Sweets To The Sweet” by Robert Bloch (1947) – A housekeeper encourages a lawyer to look into how his brother, her former employer, treats his six year old daughter. She tells him about signs of abuse she’s seen and how his brother claims his daughter is a witch. When the lawyer goes to investigate, he finds there may be more truth to the statement than he initially believed in this horror classic with a fantastic, grisly ending.

2. “The Waxworks” by A.M. Burrage (1931) – A freelance journalist stays overnight alone in a wax museum’s ‘Murderers’ Den’ to write an article about the experience. He believes he’ll be fine as he’s not superstitious. The night proves an eventful one. The effigy of a French mass murderer Dr. Bourdette begins to speak to him. Bourdette was never found but was believed dead. Bourdette was said to be a master mesmerist who could use those abilities to paralyze his victims while cutting their throat with a shaving blade.

3. “Used Car” by H.R. Wakefield (1932) – A father buys a car for his daughter, but whenever it’s driven at night, there seems to be a pair of malicious beings present.

4. “The Inexperienced Ghost” by H.G. Wells (1902) – A man tells his friends of how he encountered a ghost in his house and demanded to know why it was haunting the place. The ghost is unassuming and explains that he doesn’t remember the right motions to allow him to disappear. The man helps him figure it out and thus learns the secret himself, which he attempts to demonstrate to the group. This is primarily a humorous take on the ghost story.

5. “The Whistling Room” by William Hope Hodgson (1910) – This story made me a fan of Hodgson’s work. In it Carnacki investigates a room in an Irish castle from which a whistling sound emanates. The room is haunted by something supernatural and extremely powerful that pushes Carnacki to the limit. I love the imaginative form this thing takes and the spooky reason behind the haunting. This is my favorite Carnacki tale.

6. “The Last Drive” by Carl Jacobi (1933) – A man has to transport the body of a race car driver who died in a crash during a bad winter storm. When the van he’s driving breaks down on a lonely road, things take a disturbing turn.

7. “The Monkey’s Paw” by W.W. Jacobs (1902) – A friend, who’s spent time in India with the British army, gives a family a withered monkey’s paw said to have the magical ability to grant three wishes. After he leaves, they decide to give it a try, only to find that the claims are true but come at a horrible price. This is a true classic of the horror genre.

8. “Second Night Out” by Frank Belknap Long (1933) – On a ship to Havana a passenger gets sea-sick and sits in a chair on deck that should have been removed. He’s overcome by a terrible smell and horrible visions. In a panic he asks a steward about the chairs. The steward appears dismayed and explains that something pulls out the chairs on the second night of every voyage and sits in them. This is a fantastic weird-horror tale on the open water.

9. “The Hills Beyond Furcy” by Robert G. Anderson (1966) – When a man and his beautiful fiancé get married, it breaks the heart of a mutual friend who had a crush the woman. After some awkwardness, the couple take their honeymoon in their friend’s native land of Haiti. Things take a spooky turn in the tale of voodoo magic.

10. “Floral Tribute” by Robert Bloch (1949) – A boy, raised by his grandmother who lives near a graveyard, is happy playing among the tombstones. He brings home fresh flowers from the graves every day. At night some of the denizens of the necropolis come to talk with the grandmother. This story is more eerie and touching than scary. 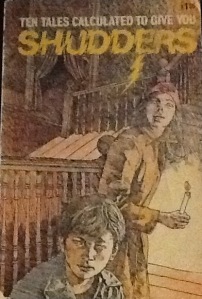 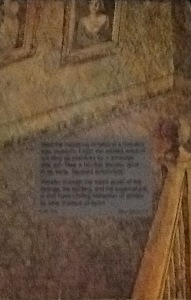 One thought on “SHUDDERS ANTHOLOGY REVIEW”