The second stop on our journey through classic, horror anthology movies brings us to DEAD OF NIGHT produced by Ealing Studios in 1945. This British feature begins with the arrival of an architect at the stately Pilgrim Manor to consult on some renovations. He’s immediately disturbed to realize he’s seen everyone there during his recent bout of horrific nightmares. Things become even stranger when he’s successfully able to predict events about to happen. This causes the group to begin discussing their own personal encounters with the supernatural.

I very much enjoyed this movie. The majority of the segments were effectively eerie, and even features an adaptation of E.F. Benson’s story “The Bus-Conductor”. It all culminates in a superb, surrealistic nightmare ending. DEAD OF NIGHT is primarily remembered for its often imitated ventriloquist and his evil dummy story, but I also equally enjoyed the one with the hearse driver, the spooky Christmas party, and the haunted mirror. I found only the golf story a disappointment.

Now we’ll talk briefly about and give a rating for each segment:

Excellently done! It starts out subtly eerie and provides a natural set up for all the subsequent stories. I also loved the nightmarish climactic ending.
Rating: 3.5 out 5 Green Skulls

I loved getting to see this adaptation of an E.F. Benson’s story (“The Bus-Conductor” 1906), as he’s among my favorite horror writers, so this automatically scores high with me.
Rating: 3 out of 5 Green Skulls

This one was fun as well and quite reminiscent of the A.M. Burrage story “Smee”. Considering my great love of ghost stories set during the Christmas season, this was nice to see.
Rating: 3 out of 5 Green Skulls

A man receives a large, old mirror which regularly reflects the interior of an opulent, ancient medieval room rather than that of his own as something from the past begins to possess him. This was my favorite part of the movie.
Rating: 4 out of 5 Green Skulls

I didn’t really care for this one, but as a general rule, I tend to be biased against comedic horror. Here we follow two obsessive golfers involved in a love triangle with a beautiful woman who can’t pick with which one she wants to be. It’s based on an H.G. Wells story that’s played for laughs.
Rating: 1.5 out of 5 Green Skulls

This well-crafted story tells of a disturbed but successful ventriloquist who believes his disrespectful, taunting dummy is really alive and how that leads him into madness. Various versions of this have been produced many times in the years following this movie.
Rating: 4 out of 5 Green Skulls

OVERALL RATING FOR DEAD OF NIGHT: 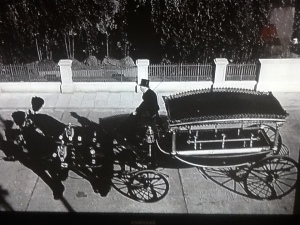