The Ark is a vast space ship transporting the last survivors of Earth, following its destruction by a rogue black hole to a new inhabitable planet. Everyone onboard are descendants of those specifically chosen to contribute to getting them to their destination. After journeying through the galaxy for centuries, they are finally mere weeks away from arrival. All the inhabitants have been tagged with a chip allowing them to mentally communicate, download data directly into their minds, visually stream what they are seeing, and be constantly tracked by the ship’s authorities. This has virtually eliminated serious crime on The Ark over the years. But now, a geneticist has suddenly gone missing. His implant is offline, and he can’t be located. His work being vitally important, constable Bryan Benson is called in to find him. Benson is famous, not due to his role as chief constable of the Avalon sector of The Ark, but because he was previously a legendary hero of the station’s most popular sport Zero. It’s similar to football but played in zero gravity with the goal of being the first team to drop their score to zero.

What follows is a fast-paced science fiction/murder mystery/adventure that leads Benson to investigate stolen art, secret cults, and political corruption along the way. Benson is a likable, everyman-type character who doesn’t always make the right deductions and often pays the price for those follies as he relentlessly strives to get to the bottom of the case. I rarely read science fiction novels, but I bought this one after meeting the author at GenCon over the years. I decided to give it a read while traveling overseas recently and was instantly hooked. I tend to read very slowly, but this one really kept the pages turning for me. There’s a blurb on the book’s back cover where a reviewer compared it to a “locked room murder mystery”, which I think is an apt assessment. It’s well-worth your time and money to pick up a copy of THE ARK for yourself. 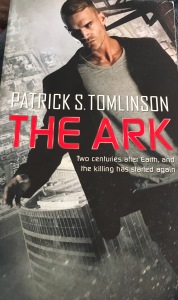 THE ARK is published by ANGRY ROBOT BOOKS (2015) is available on Amazon at https://www.amazon.com/Ark-Children-Dead-Earth-Book/dp/0857664840 and other major booksellers.

TRIDENT’S FORGE, a sequel to THE ARK has also been released: https://www.amazon.com/Tridents-Forge-Children-Dead-Earth-ebook/dp/B011G4DNDE