A few times previously here at Horror Delve, I’ve mentioned my childhood love of adventure game books. First, I presented several of my favorite horror themed books from both the Choose Your Own Adventure and Which-Way series ( https://horrordelve.com/2014/04/05/horror-themed-adventure-game-books/ ). Later, I talked about some of my favorite fantasy themed ones, pulling from the Wizards, Warriors and You, Fighting Fantasy and Grail Quest series ( https://horrordelve.com/2016/06/13/fantasy-themed-adventure-gamebooks/ ). This time we’ll examine some from a Science Fiction series I loved, the Be An Interplanetary Spy line. In them you take the role of a spy working for an organization called the Interplanetary Spy Center who are tasked with combating crime and terrorizism throughout the galaxy. In each book you’re given a different alias to help carry out your missions which are set in a variety of exotic, cosmic locations. The books are filled with numerous, simple brain teaser-type puzzles to solve along the way usually in the form of decoding a cypher, beating a maze or recognizing a pattern. None, of which, are especially difficult. The fun here is really in the storytelling and the accompanying illustrations.

1. Book #2: The Galactic Pirate Story by Seth McEvoy, illustrated by Marc Hempel and Mark Wheatley (1983) – You need to track down and bring in the infamous Marko Khen, a space pirate and robotics expert. He’s behind a rash of rare animals being stolen and mutated into terrible creatures by a band of criminals. As you progress you’ll end up investigating the horrors of the Biodroid tanks, square off against alien sharp shooter Larat Ron, and evade Khen’s mutated creatures before encountering Marko himself. 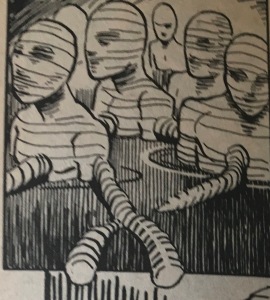 2. Book #6: The Star Crystal story by Ron Martinez, illustrated by Rich Larson and Steve Fastner (1984) – You’ve been tasked with preventing the theft of a priceless crystal which is being transported aboard a new type of spaceship named the Mobius Express by interplanetary diplomat Quarboss Tro. You’re given the identity of an art expert named Darkstar. During the flight the Star Crystal does indeed get stolen leaving you to discover which of the other alien guests is the thief and capture him. Is it Callisto the sculptur who uses his warp chisel to create impossible designs, Freeba the painter, the aquatic musician Cicelea, or someone else entirely? You’ll have to solve the mystery while maintaining your secret identity before the Mobius exits warp drive allowing the criminal to escape with the crystal. This is essentially a locked room mystery with aliens on a spaceship. 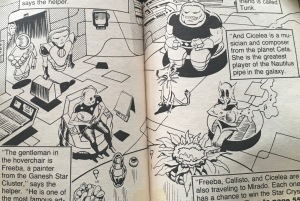 3. Book #9: Ultraheroes story by Len Neufeld and Michael Banks, illustrated by Dennis Francis and Steven Fastner (1984) – Tunk, who previously appeared as Callisto’s pet in The Star Crystal, contacts you to help him indetify and capture a saboteur who’s posing as one of the powered individuals on a team called The Ultraheroes. You pose as a new teammate and are thus equiped with gadgets that allow you to pass yourself off as someone worthy to join their ranks. It doesn’t take long for you to zero in on which team member it is. You even quickly learn why but stopping the source behind it will test you and the rest of The Ultraheroes. This is a fun space superheroes mystery which makes it a rarity. 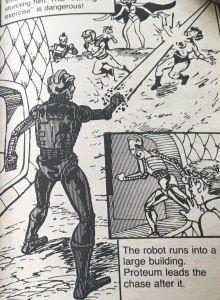 4. Book #10: Planet Hunters story by Seth McEvoy, illustrated by Darrel Anderson (1985) – A trio of galactic villains have escaped captivity and are using their deadly Nethergun which fires mini-black holes to destroy planets in their path. They’ve already taken out 14 planets by the time you’re assigned the mission to sneak aboard their ship while it’s docked for repairs and take them down before they can do more damage. It won’t be easy because each of these galactic terrorists possess special powers and abilities. Gradak can shapeshift, Venya can turn plant life into murderous weaponsSeRich Larson that follow her commands, and Sarvala is a huge giant who yields the Nethergun. Planet Hunters remains one of my favorites. 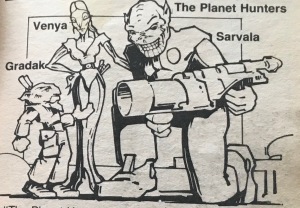 2 thoughts on “Be An Interplanetary Spy Adventure Game Books”