Mark Justice has been often featured here at Horror Delve over the years, and for good reason. He did a lot of great things during his too short life. He (along with David T. Wilbanks during its early years) hosted the marvelous Pod of Horror podcast. Filled with interviews of promenant horror writers and book reviews, all presented with Mark’s delightful sense of humor, I looked forward to every episode. Mark was also a phenomenal writer. His short story collection, Looking at the World With Broken Glass In My Eye, is one of my all time favorites. “Song of the Bones”, “Deadtown”, “Hole in the Sky” and “The Autumn Man” are all outstanding. There’s no question Mark loved the horror genre. He also loved both superhero comics and the old pulp heroes of yesteryear. He successfully combined these loves into his novel, The Dead Sheriff: Zombie Damnation. Mark asked me to review it when it initially came out back in 2014, and even though I knew what an awesome writer he was, I hesitated due to it being a weird western story, and I’m generally not a fan of westerns. Still, I couldn’t say no to Mark, one of the nicest, more genuine people you could ever meet. So, I agreed.

I was instantly hooked.

The story follows Richard O’Malley who is a journalist on the trail of the Dead Sheriff, a lawman risen from the grave to continue his fight against crime, or so it seemed. Impervious to bullets, unable to be bought, he’s an undead force to be reckoned with. I loved the rich world in which it all takes place. I found the magic and the various masked vigilantes mentioned throughout fascinating. Even if westerns aren’t your thing, you’ll still love this book.

Here’s what Mark himself had to say about The Dead Sheriff when I interviewed him back in 2013: “It’s sort of a take on The Lone Ranger story turned inside out and backwards. It’s set in the West right after the Civil War, and there’s the legend of The Dead Sherriff, who the story says was a lawman who was murdered along with his family, and he came back from the grave to avenge them. He’s got a faithful Indian sidekick, like The Lone Ranger. When the truth comes out, it’s the sidekick who had discovered a mystical artifact that allowed him to reanimate corpses. He does this and presents to the world this undead lawman. They travel from town to town as bounty hunters. They collect the bounties, and that’s what the faithful Indian sidekick makes his living with. He’s the puppet master for this reanimated corpse that everyone thinks is the avenging lawman, who actually is not moving of his own free will. Although in the first book there are some hints that there are some other things going on there.” 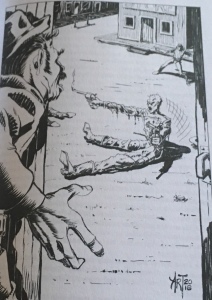 Plans were in place for Airship 27 Productions to republish The Dead Sheriff: Zombie Damnation with sequel books to follow, but with Mark’s sudden death in 2016, it seemed that might not happen. Mark’s wife Norma, however, knew he wouldn’t want this colorful, exciting world he created to disappear, so she worked to get Ron Fortier, the managing editor for Airship 27 Productions, what he needed to go forward, including Mark’s partially completed second book manuscript. The revised and expanded first book has since been republished, complete with new cover art by Zachary Brunner and several great interior illustrations by Art Cooper. I was happy to learn Ron will finish, edit and publish the second Dead Sheriff book with an eye to possibly write more in the future. I know Mark would love knowing the world and characters he created would continue on having adventures even after he was gone, a lasting legacy to the great, marvelously creative man he was.

I’ve included some of the great illustrations included in this new version of The Dead Sheriff: Zombie Damnation.

Get your copy of The Dead Sheriff by Mark Justice Here: https://www.amazon.com/Mark-Justices-Dead-Sheriff-Damnation/dp/1946183008

You can read my interview with Mark Justice Here: https://horrordelve.com/2013/12/02/an-interview-with-mark-justice/

My review of The Dead Sheriff’s initial release: THE DEAD SHERIFF BY MARK JUSTICE REVIEW 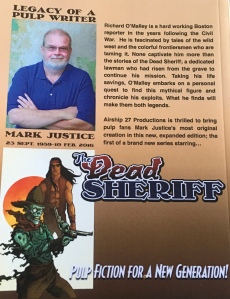