Born To The Dark, the second book in the Brichester Mythose Trilogy by Ramsey Campbell, follows Dominic Sheldrake into adulthood. Set in the 1980’s, thirty years or so following the events of The Searching Dead (book #1), Dominic is married to his wife Leslie, and together they have a young son named Toby who’s been experiencing bizarre dreams and seizures when he sleeps. To help combat this, Leslie enrolls Toby in a program called Safe To Sleep, an organization that works with children with similar issues. Unfortunately, Dominic comes to discover his old school teacher, the occultist Christian Noble, and his daughter Tina are the architects of the group. They’ve been using the children to accomplish their own dark deeds. Leslie, however, does not believe her husband’s claims. In fact, she’s been exceptionally pleased with the progress their son has made during his time there. As Dominic continues to pursue his relentless investigation into Safe To Sleep, his relationships with both Leslie and Toby become strained. He and Leslie end up undergoing divorce proceedings which introduces us to one of the most loathsome characters in the novel, Leslie’s aggressive and manipulative lawyer Colleen Johns. Colleen seems to have a real axe to grind against Dominic, always twisting his words against him and pushing for every sort of maximum punishment she can conjure up. Ramsey’s mastery of language really shines through her as Colleen continually digs the knife in against Dominic.

It takes a bit longer to get to the supernatural elements in this one than in the first book. There’s more a focus on Dominic’s personal life, such as his martial problems, difficulties dealing with his son’s experiences at Safe To Sleep and the struggles of his ailing father in the hospital, which I found a tender reminder of the bond between a father and his son. Several mysteries are at play throughout. What exactly are the Noble’s doing with the children at Safe To Sleep? What was the malleable thing that suddenly appears inside the back of Dominic’s moving car? Then, there’s Tina’s toddler son Toph who acts far older and wiser than he should for his age. The story climaxes in an intense finale, as Dominic and his childhood friend Jim come face to face with a formless power that seems to warp the world around them.

All in all, this is another excellent book by Ramsey Campbell. I’m enjoying watching Dominic during these different stages of his life in these first two books. I was also impressed at how different the supernatural menace appears this time. It’s grown in its power and influence over reality. I’m very much looking forward to the third and final installment of this excellent trilogy. 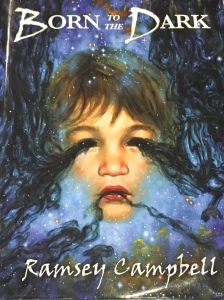 5 thoughts on “BORN TO THE DARK BY RAMSEY CAMPBELL”