I’ve featured the great Fritz Leiber here a few times before, both with his horror ( https://horrordelve.com/2014/05/17/fritz-leiber-horror-stories/ ) and with his Fafhrd and The Gray Mouser fantasy stories ( https://horrordelve.com/2014/08/02/fritz-leibers-fafhrd-and-the-gray-mouser/ ). He’s easily among my favorite writers in either genre. Today we’re going to look at some more of his horror contributions.

1. “I’m Looking For Jeff” (1952) – The beautiful ghost of a woman named Bobby chooses to reveal herself only to men of her choosing, always asking if they’ve seen a man named Jeff. She becomes more solid as she drinks and uses her allure to control men in her undying vendetta against the mysterious Jeff.

2. “A Bit Of The Dark World” (1962) – A group of professional friends with an interest in the supernatural go to stay at a house where strange things have occurred. The trip starts off with a fascinating discussion on what constitutes, as well as some possible explanations for, the supernatural. Afterward, they see a bizarre figure made of shadow as they approach the place. The group ends up catching a glimpse and suffering the effects of something vast and cosmic in scope, leading to a climatic, terrifying end. This horror novelette brings the characters into contact with an entity of such magnitude that their minds struggle to cope with it.

3. “The Casket Demon” (1963) – A popular German scream queen actress named Vividy Sheer is desperate to get publicity in order to forestall the effects of an ancient curse placed upon her family. The curse states, “When the world has nothing more to say, the last of the Sheers will fade away.” Since she’s recently fallen out of the tabliod spotlight, the voluptuous actress has begun to lose her physical substance becoming light as a feather and ghostly. She decides her only hope to gain media attention is to release a deadly Casket Demon who will relentlessly try and kill her each night from the attacks, assuming she survives them.

4. “The Black Gondolier” (1964) – A man talks about the mysterious disappearnce of his quirky friend who believed the oil beneath the Earth’s crust had intellect and was subtly manipulating world events for its own collective means. His friend had a reoccurring dream that he was riding inside a black gondolier through the canals of Venice, California rowed by a thin, black-cloaked gondolier. I feel this story would have been well served to cut out large sections of the beginning which spent too much time with the narrorator speculating about the possibilities of his friend’s weird claims. Ultimately, it went too long, and I found myself skimming sections of it as a result.

5. “Midnight in the Mirror World” (1964) – A man notices a woman wearing a veil placing her hand on his reflection in a mirror facing another mirror creating an endless stream of reflected images. The woman only appears in one of these reflections, however, and he looks fearful in that one. Whenever the clock strikes midnight, the woman appears closer to him in the reflection, then disappears after the chiming is done. He tries to figure out what prompts this mirror woman to appear and what will happen when she reaches the nearest reflection.

6. “Black Corridor” (1967) – This science fiction/horror tale tells of a man who doesn’t know who he is waking up in a long, dark corridor that ends in a choice between two doors. A wall sliding forward constantly behind him forces him to pick a new door, each marked with a different glowing word or phrase. The choices begin with either “Air” or “Water”, but each one he passes through forces a choice between two more different options with new, and usually ominous words on them. It’s a fun read! 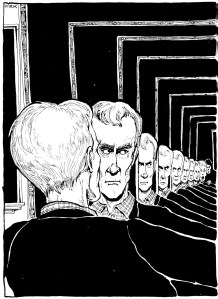