It’s time once again for another incarnation of the Horror Delve Ultimate Fantasy List. Previously, we’ve presented the Ultimate Fantasy Weapons (https://horrordelve.com/2016/02/14/the-ultimate-fantasy-weapons-list/) and Ultimate Fantasy Creatures lists (https://horrordelve.com/2017/02/11/ultimate-fantasy-creatures-list/). This year brings forth the Ultimate Fantasy Weird Places List. I asked each of our exceptional panel of writers to briefly tell us about one of their favorite weird places. These would be locations where reality is different or twisted in some way, such as the murderous tower Fafhrd and The Gray Mouser enter in Fritz Leiber’s “The Jewel in the Forest” or the shadowy extra-dimensional passageway called The Ways in Robert Jordan’s Wheel of Time series. I asked each writer to participate because of the outstanding work they produce, their friendliness, and they’re being fans of the genre. I urge everyone to check out their bios which immediately follow the list. Give their links a click to see what cool things they have to offer.

Joanna Parypinski‘s Choice – ASSHAI (From A Song of Ice and Fire/ Game of Thrones by George R. R. Martin): “Asshai is a city shrouded in shadow and mystery from the A Song of Ice and Fire / Game of Thrones series. On the far eastern end of Essos, Asshai is a city “at the end of the known world.” Because it lies in the Shadow Lands, it is often called Asshai-by-the-Shadow. It is said to be a huge, sprawling city made out of black stone, making it always dark. Melisandre, the Shadowbinder, hails from Asshai, and this is where R’hllor, the Lord of Light, is most prominently worshipped. Alchemists, red priests, necromancers, and wizards live in Asshai, free to practice their magic for good or ill. No one knows who built Asshai, and those who live there claim that the city has been around since the world began and will remain until the world ends.” – Joanna 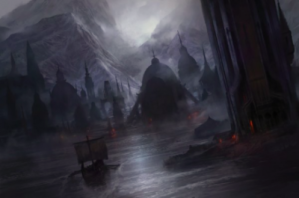 Bob Freeman’s Choice – THE CHAPEL PERILOUS (From the King Arthur Legends): “In the tellings of Arthur, one of the linchpins of the legend finds the king falling ill and impotent, and in turn Camelot and the kingdom becomes a ravaged and desolate wasteland. Hither comes Percival, a knight, brave and true, embarking on a quest for the Holy Grail, a hallowed vessel that promises to bring life and fruitfulness back to king and kingdom. Many knights have tried and failed, but Percival presses on, against horrific obstacles and harrowing temptations, until at last he passes through the Chapel Perilous, where his greatest challenge awaits… The Chapel Perilous is one of the most enduring locations in the Arthurian mythos. It is symbolic of initiation and purification through nightmare and unfathomable temptation. We all must face our demons by entering the dread chapel. Madness or redemption is our reward.” – Bob 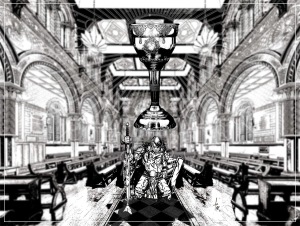 Karen Bovenmyer’s Choice: SHADESMAR (From The Way of Kings by Brandon Sanderson): “Have you heard of the collective unconscious? Shadesmar is a plane of intuition and artistic expression that surrounds us-when our sixth sense touches Shadesmar, we make intuitive leaps. An endless sea of tiny glass beads. Flames hovering “like the tips of candles.” A black sky with a white sun. Soulcasters, magic users from Sanderson’s Stormlight Archives books, physically visit this plane while spellcasting. Deep, profound thoughts form the Seas of Regret, the Nexus of Truth or Imagination, and the Expanse of Densities. Enter Shadesmar and find embodiment of the cognitive self.” – Karen

Map by by Isaac Stewart

John Linwood Grant’s Choice – THE HOUSE OF SILENCE (from The Night Land by William Hope Hodgson): – “Dread often leaves a greater impression than joy, and I can never forget one particular fantasy location – William Hope Hodgson’s The House of Silence, from The Night Land. Passed on the hero’s journey, it is a place which is exactly what it says. Set in the unbearable darkness outside the Last Redoubt, from its windows and its open doorway shines “The cold steadfast light and the inscrutable silence of Evil.” There is no explanation of its power, only that by its very existence, it can lure even the bravest inside, utterly consuming their souls. No struggle, no screams, but silence and irrevocable destruction. Truly scary.” – John

Barry Jacobs’ Choice – DREAM’S LIBRARY (from Neil Gaiman’s Sandman): “It’s a book lover’s dream. Or is Dream a book lover? The library of The Dreaming has every book never written, every story never told. They exist in the back of your head, in your sleep. Remember that great idea you had for a novel just before you fell asleep, but when you woke up you couldn’t remember how it went? The Librarian here can tell you… if only you had a library card from The Endless.” – Barry

Matt Cowan’s Choice – A (From The Wheel of Time Series by Robert Jordan): – “Shadar Logoth, or “Where The Shadow Waits” was once the capital city of a powerful nation known as Aridhol before a mysterious stranger named Mordeth gained the ear of the king polluting his mind with evil plans. The dark influence soon spread throughout the city driving everyone mad. Stores of rich treasure still sit inside its deteriorating walls, all of it tainted by the curse of madness that destroyed Aridhol from within. That same twisted evil still haunts the ruins in the form of a terrible fog known as Mashadar that spreads throughout the city at night consuming anything it touches. Its presence is so mindlessly destructive that it even evokes fear in the terrible shadowspawn creatures of the area.” – Matt 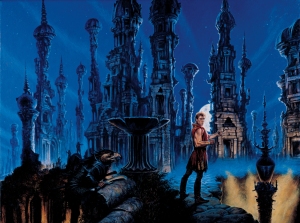 Joanna Parypinski: Joanna Parypinski is a college English instructor by day and a writer of the dark and strange by night. Her work has appeared in Nightmare Magazine, Haunted Nights, The Beauty of Death 2: Death by Water, and elsewhere. Living in the shadow of an old church that sits atop a hilly cemetery north of Los Angeles, she plays her cello surrounded by the sounds of screaming neighbor children.

Bob Freeman: Bob Freeman is an artist, game designer, paranormal adventurer, and author of two book series — The Cairnwood Manor series ( Shadows Over Somerset & Keepers of the Dead) and Tales of the Liber Monstrorum (First Born).

A lifelong student of mythology, folklore, magic, and religion, Freeman has written numerous short stories, articles, and reviews for various online and print publications and is a respected lecturer on the occult and paranormal phenomena.

He lives in rural Indiana with his wife Kim and son Connor.

Karen Bovenmyer: Karen Bovenmyer earned an MFA in Creative Writing: Popular Fiction from the University of Southern Maine. She teaches and mentors students at Iowa State University. She is the 2016 recipient of the Horror Writers Association Mary Wollstonecraft Shelley Scholarship. Her poems, short stories and novellas appear in more than 40 publications and her first novel, SWIFT FOR THE SUN, an LGBT romantic adventure in 1820s Caribbean, debuted from Dreamspinner Press March 27, 2017.

John Linwood Grant: John Linwood Grant is a professional writer who lives in Yorkshire with a pack of lurchers and a beard. He writes strange historical horror and contemporary fiction, including the Mamma Lucy tales of 1920s hoodoo and the Last Edwardian series. He is also editor of Occult Detective Quarterly, plus three forthcoming anthologies. His 2017 collection ‘A Persistence of Geraniums’ – stories of murder, madness and the supernatural – is now available on Amazon.

Barry Jacobs: Barry Jacobs has lived in Brooklyn all his life. He considers that a point in his favor.

Catch up with him here: https://www.facebook.com/barry.jacobs.31?fref=ts

Matt Cowan: Matt Cowan is a writer whose love for the horror and fantasy genre stretches back beyond his earliest childhood memories. In addition to his fiction work, he writes about some of the classic and modern genre writers over at his blog Horror Delve. He also writes the retro-movie review column, Matt Cowan’s Threat Watch, for the science fiction magazine Black Infinity from Rocket Science Books.