Edith Wharton (originally Edith Jones) was born in 1872 in New York City, New York to an upper class family. Her marriage to Edward Wharton was an unhappy one that ended in divorce in1913. She enjoyed mainstream success as a writer, publishing THE HOUSE OF MIRTH in 1902, ETHAN FROME in 1911, and became the first woman to win a Pulitzer Prize for Literature in 1920 for her novel THE AGE OF INNOCENCE. She was good friends with many luminaries of the time, most notably Henry James. After her divorce she moved to France, where she died of a stroke in 1937, still writing from her bed to the very end. In 1916 she was awarded the title of Chevalier in the French Legion for her tireless efforts to assist orphans, refugees and woman in need during World War I. She produced no less than 14 novels and novellas, 85 short stories and other poetry and non-fiction work during the course of her life.

Surprisingly, from someone who produced such great works in the field, Edith claimed she couldn’t even sleep in a room that contained a book of ghost stories before she turned twenty-eight

Here we will focus on her ghost stories collected in the collection, THE GHOST STORIES OF EDITH WHARTON, published by Scribner Paperback Fiction (1997) with illustartions by Lazlo Kubinyi (a few of which I’ve included below).

1. “The Lady’s Maid’s Bell” (1904) – A woman takes a maid’s position in a house to replace one that recently died. The woman of the house wants a maid who can also serve as a friend. Her husband is gone a lot, and when he is there he’s unpleasant. There are hints of potential affairs going on by both. The new maid begins to hear the bell ring, signifying the lady needs assistance, but when the maid enters she finds out the lady didn’t ring it. The new maid soon begins to see the apparition of the maid she replaced. 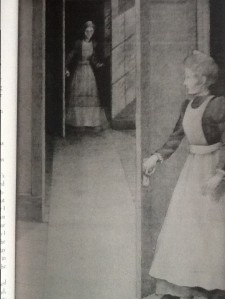 2. “The Eyes” (1910) – A writer tells a group about a haunting he endured by a ghost that manifested as a pair of sinister eyes at the foot of his bed. The timing of its appearances is odd and deeply disturbs him each time. This is a great story that draws you into the main character’s life and maintains a strong feeling of supernatural oddity involving the eyes. 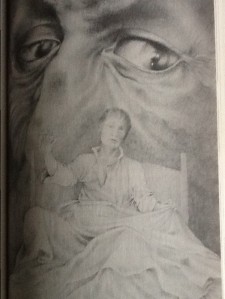 3. “Afterward” (1910) – An American couple comes into money after the husband pulls off big business deal. They move to England and find an old, secluded house. They are told the house is haunted, but in a way that you wouldn’t realize until long afterward. Things proceed leisurely until the wife learns of a lawsuit being brought against her husband involving the business transaction that brought them their newfound wealth. Soon afterwards a man comes to see her husband. After the meeting, she learns her husband unexpectedly and without explanation left the house with the man. The rest of the story revolves around the search for her husband, the mysteries surrounding his business, and what involvement the previously mentioned ghost has to play in everything. 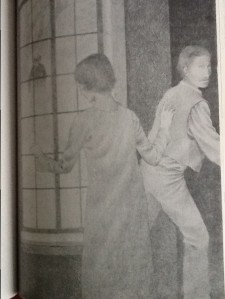 4. “Kerfol” (1916) – A woman visiting a house she’s thinking about buying encounters a pack of somber, mysterious dogs. The house is called Kerfol and has a strange history involving a woman who was accused of killing her husband. Upon further examination of the court records and testimonies, it’s discovered the woman accused of that murder was a dog lover, but her husband hated them (for reasons explained in the story). Mysteries and answers unfold as they plunge deeper into Kerfol’s past and its previous residents.

5. “The Triumph of the Night” (1914) – A man is dropped off at a train station in a town where he’s found a job. To his dismay, the woman who hired him failed to send a coach to pick him up from the station. To make matters worse, it’s a cold, wintery evening, and there doesn’t seem to be a way for him to get to his destination other than a long, frigid walk. A young man pulls up however and extends an offer for the man to stay with him at his uncle’s house until the following day. He happily agrees and accompanies the man, who’s in obviously bad health. The large house fills the traveler with dread for some reason. Later, when he meets the uncle he’s further disturbed to see an evil double of the affluent man constantly glaring at his ill nephew. His fear grows once he realizes he’s the only one who can see this doppelganger. A spooky tale set in a rich, snowy atmosphere.

6. “Miss Mary Pask” (1925) – A woman traveling abroad in Europe goes to visit the house of her friend’s sister. The sisters were inseparable until one got married and moved away. The sister who remained in Europe, Miss Mary Pask, became a lonely recluse. When the woman goes to visit the house she finds it dark and ominous. Shortly after being greeted by Mary Pask, the traveler remembers hearing about her death a year ago. Mary Pask is desperate for companionship, but her caller wants nothing more than to escape the house where she finds herself talking to a woman who should be in her grave.

7. “Bewitched” (1925) – A woman brings a group together to help find a way to save her husband, who is being drawn to meet the ghost of a woman to whom he was once engaged. The pale, gaunt husband is in obvious distress over these meetings with the dead woman. The group converges on the spot of these meetings to find prints of a barefooted woman in the snow.

8. “Mr. Jones” (1928) – A woman inherits a house from relatives she doesn’t know very well. When she first goes to see it she’s turned away at the door by a servant who says Mr. Jones won’t allow her to enter. When she does eventually move in, she learns Mr. Jones is the very old head servant who has a strong hold on the house and it’s servants despite the fact the new owner isn’t aloud to see him. The house and Mr. Jones seem to be concealing secrets from her. The question of how old Mr. Jones may actually be, and how he stays hidden are at the core of this supernatural mystery. 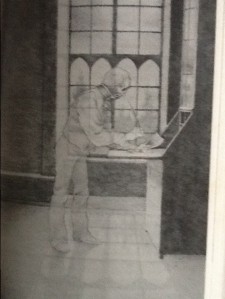 9. “Pomegranate Seed” (1928) – A happily married woman becomes concerned by notes which are periodically delivered to her husband during their brief marriage. He always reads the notes alone and is noticeably disturbed afterwards. The handwriting used to address the envelopes is feminine, but she knows he’s had no previous relationships with anyone save her and his deceased first wife. When confronted about the notes he refuses to talk about them or about who sent them. She can tell it’s tearing him apart to keep the dark secret. Dread mounts as to what the notes say, who wrote them, and their terrible hold on the husband as the story builds to it’s climax. This is my favorite Wharton story.

10. “The Looking Glass” (1935) – A woman recounts a time in her past, when she convinced a friend she was able to contact the spirit of a man who died on The Titanic. The friend is haunted by her unrequited romantic interest in this man for many years. Less of a ghost story, more of a love tale.

11. “All Souls’” (1937) – Sara Clayburn encounters a woman she doesn’t recognize walking towards her house one cold October evening. When asked what she wants the lady replies, “Only to see one of the girls”. Shortly afterwards Sara falls and injures her ankle, confining her to her bed. Her maid insists on leaving food in her room overnight in case she gets hungry, which wasn’t something she normally did. The next morning, none of her servants come to attend to her, and she’s forced to walk on her damaged ankle through the house in search of assistance but finds the place deserted. Time drags on with no one around and no clue as to where they’ve gone. A year later, she again encounters the strange woman from the time she hurt her ankle and begins to piece together the meaning of the strange days of solitude in the house.

6 thoughts on “The Ghost Stories of Edith Wharton Review”