In a previous article I covered a few eerie stories and gave some background on Sherlock Holmes creator, Sir Arthur Conan Doyle ( https://horrordelve.com/2015/03/04/sir-arthur-conan-doyle/). Today we’re going to take a look at a few more of his excellent, weird tales.

1. “The Secret of Goresthorpe Grange” (1883) – A man hires his ne’er-do-well relative to find a ghost to haunt his medieval castle that doesn’t have one in this longer, humorous piece.

2. “The Red-Headed League” (1892) – The great detective Sherlock Holmes is approach to investigate a bizarre case by a man with bright red hair. The man, whose pawn brokerage business has been struggling, relates how he was offered an easy part-time job to supplement his income. Strangely, he qualified for this opportunity because of his red hair. He works the job for a brief time before the company suddenly closes its doors without notice. Holmes pieces together this bizarre, seemingly harmless case to find something much bigger at stake than that which was initially thought.

3. “Lot No. 249” (1892) – The titular Lot No. 249 of this novelette refers to the auction number of an Egyptian mummy that stands in the dorm room of a brilliant but antisocial college student. The story’s protagonist is a skilled medical student who lives in the room above. The story does an excellent job fleshing out the characters and the unconventional friendship that develops between the two students. As strange occurrences mount, the medical student begins to suspect his downstairs neighbor is somehow using his mummy to attack those who have wronged him. He sets about trying to figure a way to put a stop to it. This is an excellent tale that has been adapted for both film and radio.

4. “The Striped Chest” (1897) – A crew boards a derelict ship they come across, finding little worth salvaging aboard. They do however find the body of a man who appears to have been murdered while trying to open a large striped chest. The chest has a warning on it imploring anyone who finds it to leave it unopened. Trouble follows when they take the chest onto their own ship.

5. “The Silver Mirror” (1908) – An accountant, hard at work on an important project, begins to see eerie images in an old silver mirror in his room. This is a great spooky, little tale. 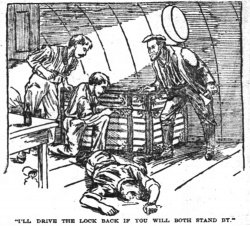