As most of you know, I’m a huge comic book fan. Growing up in the 70’s and 80’s, I loved Mark Gruenwald’s epic run on Captain America, John Byrne’s time on both Fantastic Four and Alpha Flight, Roger Stern with The Avengers and Chris Claremont on The X-Men. Comic books brought me endless hours of joy, and anytime life started to weigh heavy on my shoulders, burying myself in stacks of comics always helped me through. Over the years I’ve concocted a variety of my own heroes who carried out adventures of their own in my mind, while I dreamt of publishing them one day. Unfortunately, I don’t have an ounce of artistic talent to do so.

My good friend Mac, however, has no such limitations. Hailing from Italy, Mac is the incredibly talented musician Mac of BIOnighT. I’ve always known he had a deep love of science fiction and horror but didn’t realize, until recently, what a fan of comic books he is, so much so he’s now producing his own independent series. From what I’ve seen so far, it looks fantastic! He’s put together a Patreon page where contributors can go to get the comic for the low price of $2.50 an issue, which will allow them to receive each issue digitally as they are released. After I checked out the free 11 page teaser ( http://www.macvibes.com/GUARDIANS_OF_THE_BLUE_teaser.pdf ), I promptly signed up and now await the continuation of the story with great anticipation. Selfishly, I’m hoping enough people follow suit so the series can keep going. If you’re willing to join me in backing this project, you can do so here: https://www.patreon.com/MacofBIOnighTcomics .

The following is my interview with the creator of the new Guardians of the Blue comic book, Mac of BIOnighT.

1. Can you tell us what readers can expect from Guardians of the Blue?
Well, I’m trying to go beyond the usual bad guys vs good guys story. I’d love to accompany my characters through a journey within themselves, along with the readers. But of course I want action, too… Hopefully, it will have the correct balance between the two things.
Visually, it has a noir, retro ambiance. I’m not a fan of modern comics with all those distorted, grotesque anatomies, drawings made of thousands of extremely thin and confusing lines and completely useless details, and an overkill of computer coloring. This will be deep black and white and 70’s looking. I think all those who loved Marvel comics in that period will love this, too 🙂

2. What inspired you to create the comic?
When I was seven I saw my first comic book – or rather, the first that really had an impact on me. It was issue 5 of the Italian edition of Thor, and it also featured the first Avengers story. I read it again and again (and again, and again!) and decided I would be a comic artist when I grew up. That never happened, I didn’t have enough talent, I didn’t have the chance to attend the right school, I was in the wrong country and living the wrong life. Over twenty years ago I realized drawing had turned into frustration and pain and it wasn’t getting me anywhere anyway, so I quit. However, all the characters I created when I was a kid remained in my mind and kept living their adventures. Somewhere, deep inside, I always felt that I owed it to myself and to them to try and accomplish something with my drawings, I had to create a serious comic book. Finally, some months ago this almost unconscious thought became a desire too strong to be ignored and I picked up my pencil again 🙂

3. Are you doing all the work on it yourself?
Yes, I am, and it’s not easy… it’s a slow process and a lot of work!

4. How much of the storyline do you have planned out so far?
The whole story is clear in my mind, but it might change. It was slightly different and somewhat less satisfactory in the beginning, then I got to page 10/11… I was writing the text, a sort of monolog by one of the characters (Daimon Kreeg), when he started “talking” without me knowing what he intended to say. He just came up with the whole monolog by himself (as characters will, sometimes), I wasn’t writing it, just typing it. What he said on those two pages has changed the story and given it more depth, a more interesting direction. So who knows, something like this might happen again along the way and the plot I’ve planned might turn into something totally different once more 🙂

5. I’ve been impressed with the artwork I’ve seen on the preview pages for Guardians of the Blue. How did your talent for illustration develop?
You are too kind, I don’t think I have a talent, let’s say it’s just pure will – I want to do it.
The remarkably odd thing I discovered when I started drawing after that 20-year hiatus is that it’s much easier for me to do things now. I’m actually a much, much better artist now than I was when I used to draw almost on a daily basis! That surprised me, as I always thought a young brain would get better results, but that’s not the way it is (for me, at least). I guess that growing older I’ve learned to learn, and I’m a calmer, better observer of reality. Most importantly, at 52 years of age I feel I don’t have to prove anything neither to myself, nor to others (at last!) and I’m relaxed: whatever I do, I do it for the joy it gives me.

6. How prevalent have comic books been in Italy? Are they primarily American comics that have been imported or are there ones produced there?
Comics were successful in the 70’s and 80’s, but I guess the general public’s interest in comics has currently reached at an all-time low. Very few of them are still sold in newsstands, as most cater to a niche market that buys them in specialized stores, such as a plethora of American comics and Japanese manga. While read by diverse segments of what is just a niche market, they manage to survive nevertheless.
Among the exceptions sold in general newsstands there is the Italian (and extremely good) Disney production. At the peak of their success (many years ago) Donald Duck, Mickey Mouse and all the other characters were read by an estimate three million adult readers, plus the kids. For my country that’s an awful lot! That’s thanks to the high quality of the stories (and art), which can be pure fun but also be about serious matters and Italian pop culture, politics, and stuff you can hear on the news. Re-reading old issues is like going back through Italian recent history!
Finally, there are some Italian titles that have been going on with unwavering success for decades, such as Tex https://en.wikipedia.org/wiki/Tex_Willer that has been published with no interruption since 1948, or Dylan Dog https://en.wikipedia.org/wiki/Dylan_Dog a horror comic book you would probably love!

7. Who are some of your favorite comic book heroes and why?
I must say that I hate what has been done to all the characters in comics throughout the years, I am a fan of the original versions of their adventures, up until the 70’s, more or less. I love the first Fantastic Four, Spiderman, the Avengers, Daredevil, Batman, the Flash, Green Arrow, the Justice League, and I could go on and on and include them all! I love that era (30’s through 70’s), that sense of adventure, the “who gives a damn if it’s not logical, it’s cool!” attitude of the authors. I love their imaginative stories, the amazing artists, the costumes, the whole thing! 🙂 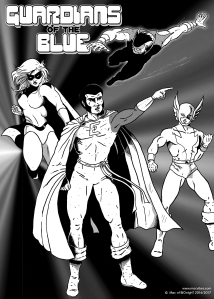 8. Being that you’re such a talented musician, is there a soundtrack running through your head while creating these adventures?
Thank you for the compliment – well, I don’t have my own soundtrack playing in my head, yet. While drawing, I usually play old records from the era when I used to create those characters as a kid/young man. This helps me find inside of me the same sensations I felt back then. However, I’m planning to put together some compilations of my music that can be used as a soundtrack while reading, and probably also an album of new music made especially for the Blue Guardians. My comic book’s supporters on Patreon will get them for free, of course 😉

9. Is there anything you’d like to add?
I am extremely happy I’m creating stories and drawing again. I’m whole again. There are parts of us we bury because we think we are not good enough, or because they are not what is (or what we think is) expected from us, because there are “more important things” to do, because we can’t allow ourselves to indulge in them, because we “don’t have time” etc etc etc etc – so many apparently logical but actually stupid reasons. Don’t do that to yourselves, do what your soul tells you to do, who cares about the results, who cares what others think of it, who cares what other “important” matters seem to occupy your life. These things you feel you need to do are a part of you, take them back, nurture them, make time for them, love them… they are a part of you, so love yourselves and do whatever makes you feel complete. They are not dreams or nonsense, they are not useless: they are you, and you matter.

2 thoughts on “GUARDIANS OF THE BLUE COMIC BOOK INTERVIEW”